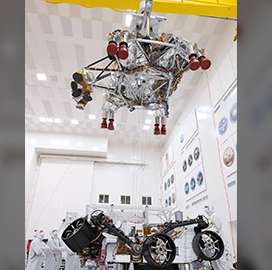 NASA has tested the separation capacity of the Mars 2020 rover's descent stage at the agency's Jet Propulsion Laboratory in California. Ryan van Schilifgaarde, a support engineer for the Mars 2020 assembly at Johns Hopkins University Applied Physics Laboratory, said in a statement published Friday that it took a day for the team to carry out static fire tests and inspection efforts for the two components.

The descent stage and the rover will undergo a series of tests within a Mars-like environment prior to its delivery to Cape Canaveral in Florida. NASA will deploy Mars 2020 via a United Launch Alliance-built Atlas V rocket in 2020, and it expects the rover to arrive at the planet's Jezero Crater in 2021. JPL has been tapped by the agency to handle the rover's operations.