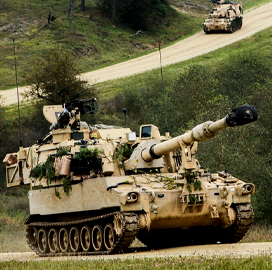 “Of course when you introduce an autoloader into a preexisting chassis that we have with the [Paladin Integrated Management platform], there are all sorts of technological risks involved with that,” Col. Timothy Fuller, program manager for armored fighting vehicles, said Monday during a panel discussion at the Association of the United States Army's conference in Washington, D.C. “It also adds an entire new cab to the vehicle,” Fuller added.

Rafferty said the service plans to use feedback from warfighters to support the development of the cannon. Rich Granitzki, long-range precision fires science and technology adviser for Combat Capabilities Development Command, said the Army is using prototypes “to drive down some of the risks” and facilitate the transition to the autoloader.