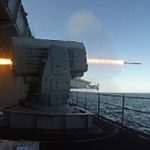 CIWS is a 20-millimeter gatling gun that uses a forward-looking infrared camera designed to detect and attack targets.

The system fired at a towed drone unit during a simulated air defense drill and at a high-speed maneuvering seaborne target during a surface engagement drill.

RAM launchers, which are equipped with built-in sensors, fired a RIM-162D Sea Sparrow missile and a RIM-116 test unit during tests.

ENSSMS is a semi-active missile that requires directors to input a feed prior to locating a target.

The carrier re-entered service after it completed a half-life refueling and overhaul maintenance period last year.