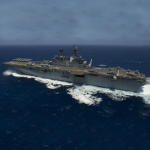 The U.S. Navy is scheduled to start installing updates on the USS America amphibious assault ship to support the operations of the F-35 Lightning II fighter aircraft aboard the vessel, The National Interest reported Wednesday.

The Navy previously upgraded USS America to align its weapons and sensors with F-35s as well as boost the flight deck’s capacity to handle F-35B vertical take-offs and landings.

USS America is the lead ship of the America-class amphibious assault ships, which currently includes one other vessel named USS Tripoli.