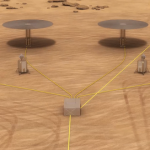 NASA will test an energy source that could power human crews on the surface of Mars and energize habitats along with processing equipment that can convert resources from the Red Planet into fuel, oxygen and water.

The space agency said Tuesday its Space Technology Mission Directorate has obligated multi-year funding to support the Kilopower project and testing will begin in November and continue through early 2018.

“What we are striving to do is give space missions an option beyond radioisotope thermoelectric generators, which generally provide a couple hundred watts or so,” said Lee Mason, STMD principal technologist for power and energy storage.

“The reactor technology we are testing could be applicable to multiple NASA missions, and we ultimately hope that this is the first step for fission reactors to create a new paradigm of truly ambitious and inspiring space exploration,” added David Poston, chief reactor designer for the Los Alamos National Laboratory.

The Energy Department‘s Nevada National Security Site will also team up with NASA to develop fission power technologies for the project.

The NASA Glenn Research Center designed and built the hardware for Kilopower while the Marshall Space Flight Center helped establish strategies for test operations and the Y12 National Security Complex will deliver the reactor core for the platform.