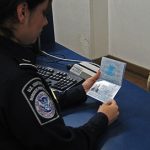 President Donald Trump has announced the creation of minimum baseline requirements for immigration and visa screening processes for foreigners who seek to enter the U.S. as part of efforts to protect U.S. citizens’ safety amid the prevalence of terrorist attacks and transnational crime.

The Department of Homeland Security developed the minimum security requirements in collaboration with other agencies and departments in the executive branch as part of the Trump administration’s move to strengthen national security measures, the White House said in a Sunday news release.

The U.S. government informed foreign countries of the new requirements in July and some of those that failed to comply initiated measures such as increasing the security of travel documents and sharing of data on terrorist threats.

The White House listed Iran, North Korea, Syria, Libya, Chad, Yemen and Venezuela as countries that do not “adequately adhere” to the new baseline requirements and announced that specific restrictions will be imposed on individuals from Somalia.

“The restrictions being imposed on these eight countries are conditional and may be lifted as they work with the United States government to ensure the safety of Americans,” the release said.

The administration will also subject Iraqi nationals to heightened scrutiny.