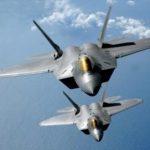 The U.S. Air Force’s 411th Flight Test Squadron has used F-22 Raptors to launch air-to-air missiles against as part of a 3.2B developmental test and evaluation upgrade to the Lockheed Martin-built aircraft.

The service branch said Thursday that the AIM-9 and AIM-120 missiles were used to engage multiple BQM-167A sub-scale aerial targets during tests held last month at the Utah Test and Training Range.

BQM-167A is designed to function as a threat-representative target drone and to support the Air-to-Air Weapon System Evaluation Program as well as other air-to-air assessment efforts of the Air Force and Defense Department.

“The shots at UTRR were the graduation live fire event of a two-year-long 3.2B upgrade,” said Lt. Col. Randel Gordon, 411th FLTS commander.