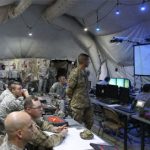 Some U.S. Army officials have said the military branch’s modernization efforts are related to its readiness goals and objectives to help unburden soldiers as they engage with adversaries, the Army News Service reported Friday.

David Vergun writes Katharina McFarland, acting assistant secretary of the Army, told a panel discussion at the Association of the U.S. Army conference that new technology will help to remove the extra load from soldiers.

“We need to make him able to spend more time thinking rather than doing,” McFarland added.

She cited unmanned ground and aerial systems as tools to expand a soldier’s scope on the battlefield.

Lt. Gen. Robert Ashley Jr., deputy chief of staff of G-2, told the forum that Army troops have been encumbered by large volumes of sensors and communications data over the last decade.

He recommended the use of artificial intelligence to help soldiers process the data and cited information sharing with coalition partners as one area that needs what he calls federation to transmit data to coalition users in near-real time.

Lt. Gen. Gustave Perna, commander of the Army Materiel Command, also called for the streamlining of the branch’s acquisition and requirements processes.

He said he believes “alignment between the requirements, generators and acquisition process” can help the Army manage the costs of sustaining weapons and equipment.