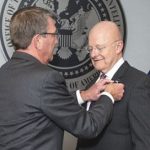 “No one has better demonstrated that instinct to serve better than Jim Clapper,” said Carter.

“He has said the reason our nation and its national security enterprise keeps evolving and keeps getting better is because of our people and their instinct to serve he says,” he added.

Carter noted that the DoD and DNI continue to work together in an effort to integrate intelligence and provide customers with new products to support decision makers, as well as help to keep the security of the country.