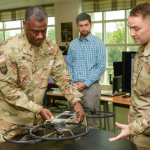 The Army Research Laboratory has built an unmanned quadcopter platform designed to deliver supplies to military personnel in the battlefield.

The U.S. Army said Friday a team of ARL researchers and engineers showed the Joint Tactical Aerial Resupply Vehicle to Maj. Gen. Cedric Wins — commanding general of the Army Research, Development and Engineering Command — during his visit to the lab.

The service branch intends for the vehicle to operate at a speed of at least 60 miles per hour and carry up to 300 pounds of payload during resupply missions.

Army researchers aim to develop a hybrid propulsion system that will work to increase JTARV’s operational range and payload capacity.

Vong added he believes incorporating sensors into JTARV will allow the vehicle to function in “degraded visual environments” and evade obstacles such as powerlines, buildings and trees.

The U.S. Marine Corps also joined the program in June.

The U.S. Navy‘s Office of Naval Research and aircraft technology developer Near Earth Autonomy will support the JTARV project to help the system achieve full autonomy, the Army added.