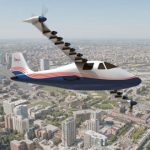 NASA has unveiled the X-57 designation to a research airplane nicknamed Maxwell, which will be equipped with 14 electric motors that serve as propellers.

The U.S. Air Force made the number designation to Maxwell and the space agency will use the experimental hybrid electric aircraft to test new propulsion technology, NASA said Friday.

NASA Administrator Charles Bolden announced the X-plane designation in Washington at the American Institute of Aeronautics and Astronautics’ annual Aviation and Aeronautics Forum and Exposition.

“With the return of piloted X-planes to NASA’s research capabilities — which is a key part of our 10-year-long New Aviation Horizons initiative — the general aviation-sized X-57 will take the first step in opening a new era of aviation,” Bolden said.

The aircraft is named in honor of Scottish physicist James Clerk Maxwell, who is known for his contribution in the field of electromagnetism.