GlaxoSmithKline, also known as GSK, is a pharmaceutical and biotechnology manufacturer. The company has developed vaccine supply doses for illnesses such as influenza, malaria, and COVID-19 and has several ongoing clinical trials. See the list of the top GlaxoSmithKline government contracts for the US government.

1. US Army Contracted for Storage, Procurement, and Distribution of Sotrovimab

GlaxoSmithKline was assigned to procure, store, and distribute Sotrovimab, a monoclonal antibody neutralizer treatment. The government purchase was completed in Durham, North Carolina on May 19, 2022. The contract was one of the many purchases of Sotrovimab made by the US government.

The contracting activity for the one-year award was the Army Contracting Command in Aberdeen Proving Ground, Maryland. The project was funded from Defense Production Act purchases, defense funds for fiscal 2021, which were obligated to the total amount of $279.86 million at the time of the award.

2. US ArmyAwarded The Procurement of Sotrovimab Additional Doses

The US Army awarded a $975.11-million contract to procure 340,048 additional doses of Sotrovimab. The project was completed on September 30, 2022, and was funded by the Department of Health and Human Services Office provided by the American Rescue Plan Act of 2021. The award also included an option for additional 715,680 doses by June 30, 2022.

The initial firm-fixed contract to purchase Sotrovimab for COVID-19 treatment was worth $651.09 million. The one-year contract was awarded on November 15, 2021, and was completed on March 31, 2022. Funding came from Defense Production Act funds for fiscal 2010 and was obligated at the time of the award.

The initial and follow-on contract awards were worked on in Durham, North Carolina. The Army Contracting Command in Aberdeen Proving Ground, Maryland was the contracting activity for both projects.

3. US Army Finalized the Procurement of COVID-19 Vaccines to Support Military Personnel

GlaxoSmithKline was contracted to procure COVID-19 vaccines from different vaccine vendors and manufacturers to support military personnel in several locations across the United States and the world. The mass quantity procurement was completed on February 28, 2021, in Research Triangle Park, North Carolina.

The Army Contracting Command in Newark, New Jersey served as the contracting activity for the project. Funding came from Army research, development, test, and evaluation funds for fiscal 2020, which was obligated to be $342 million at the time of the award.

4. DLA Ordered Injectable Influenza Vaccines for the US Military

GlaxoSmithKline and Seqirus Inc. were awarded a competitive acquisition contract under a solicitation for the government purchase of injectable influenza vaccines. GSK received $44.50 million, while Seqirus received $22 million from the defense working capital funds for fiscal 2021-2022. The ordering period’s end date was on February 22, 2022.

A year after, on February 25, 2022, both companies were awarded another contract to supply doses of injectable influenza vaccines. The funding was obligated from the defense working capital funds for fiscal 2022-2026, giving GSK $33.80 million and Seqirus $8.64 million. The ordering period’s end date is on February 24, 2023.

All contracts only had a one-year duration with no option periods. Works have been performed in Pennsylvania, New Jersey, and North Carolina. The Defense Logistics Agency Troop Support served as the contracting activity for all projects.

The Department of Defense inoculates injectable influenza vaccines for the Army, Air Force, Navy, Marine Corps, and Coast Guard to keep the force in top health condition during their mission and deployment in and out of the United States. The US government has initiated the military health systems for more than 230 years.

The Defense Logistics Agency Troop Support finalized a deal with GlaxoSmithKline for multi-dose influenza vaccine vials to be used by the Army, Navy, Air Force, Marine Corps, and other federal civilian agencies. The contract was completed on June 7, 2017.

Previously, GSK was awarded a contract for influenza vaccine and prefilled syringes on June 15, 2015. The firm-fixed-price indefinite-quantity contract was worth $11.78 million and was completed on June 14, 2016.

Both contracts were competitive acquisitions and were selected among four responses. The performance location was in North Carolina, with an appropriation type of defense working capital funds for fiscal 2015-2017. 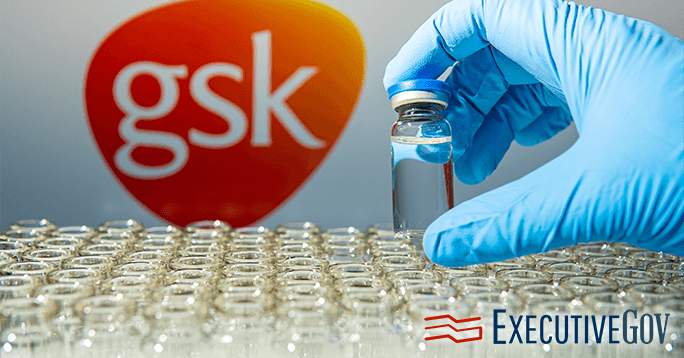 GlaxoSmithKline was formed in 2000 with the merger of Glaxo Wellcome and SmithKline Beecham. Previously, the pharmaceutical giants were separate companies of Glaxo, Wellcome, SmithKline, and Beecham. Almost 22 years after the merger, the company ranks 294th on the Fortune 500 list in 2022.

While its corporate headquarters is located in London, England, GSK has a significant presence in the United States with two corporate hubs, employing approximately 15,000 people. The company offers expanded nationwide access to its pharmaceutical products across commercial, research & development, manufacturing, and corporate functions.

What is GlaxoSmithKline’s Sotrovimab?

Sotrovimab is a neutralizing monoclonal antibody developed by GlaxoSmithKline and Vir Biotechnology. It serves as an early treatment against COVID-19 and prevents the virus from getting into the lungs to cause an infection.

Sotrovimab acts like a clone of human antibodies, sticking to the spike protein of the virus to neutralize it. Once the treatment takes effect, it can prevent reinfection from COVID-19 for at least four weeks. Sotrovimab is branded under Xevudy in the United Kingdom.

Does GSK’s Sotrovimab have FDA approval?

The Food and Drug Administration issued Emergency Use Authorization (FDA EUA) for Sotrovimab on May 26, 2021. While still unapproved, FDA allowed the treatment use of the medicine for mild-to-moderate COVID-19 in adults and pediatric patients at least 12 years old or 40 kgs. The FDA EUA applies only to positive cases where patients haven’t been hospitalized or require respiratory support.

Does GlaxoSmithKline have a COVID-19 vaccine?

Aside from offering Sotrovimab for COVID-19 treatment, GlaxoSmithKline provides the technology to improve the immune system’s response to the vaccine. GSK’s adjuvant technology increases the production of the vaccine, as it can develop large quantities of the vaccine with only a tiny amount. The company has offered this technology with Sanofi, Medicago, and SK bioscience.

At the same time, GlaxoSmithKline has worked with CureVac to develop mRNA vaccines against multiple COVID-19 variants. The preclinical test results were announced in 2021, while the clinical trial commenced in 2022. The partnership aims to build five mRNA-based vaccines and monoclonal antibodies.

Does GSK have an influenza vaccine?

GlaxoSmithKline has been awarded different government contracts for influenza vaccine doses. In February 2022, The US Department of Health and Human Services’ Biomedical Advanced Research and Development Authority extended its agreement with GSK to provide influenza vaccine for the US government.

Getting ahead of diseases with science, technology, and talent

GlaxoSmithKline government contracts have positively impacted the world’s fight against diseases. With its large scale and long history of expertise, GSK is on a mission to improve the health of 2.5 billion people worldwide in the next ten years.