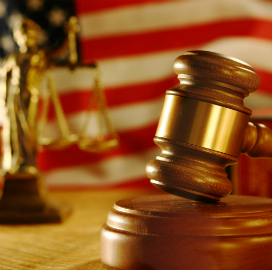 President Trump intends to nominate Michael Walsh, chief of staff at the Department of Commerce, to be general counsel of the same department, the White House announced Friday. Jason Weida, an assistant U.S. attorney in Boston, is also set to receive nomination for the inspector general position at the Department of Health and Human Services.

Walsh, who has concurrently served as acting general counsel since August 2019, joined the Commerce Department early in 2018 after he worked as a partner O’Melveny & Myers, where he represented corporate clients in various legal proceedings such as internal and regulatory investigations. He is a former pro bono partner for his own firm’s office in Washington, D.C.

Weida, who has overseen multiple investigations in the health care sector, previously worked in the Department of Justice’s legal policy office. The attorney also practiced at Jones Day and at Skadden, Arps, Slate, Meagher & Flom.

He took on pro bono cases as a litigation associate and his office was a recipient of the Massachusetts Supreme Judicial Court Certificate of Recognition for Pro Bono Service.

Earlier in his career, Weida was a law clerk at the U.S. Court of Appeals for the First Circuit, the Rhode Island Supreme Court and the U.S. District Court for the District of Rhode Island.