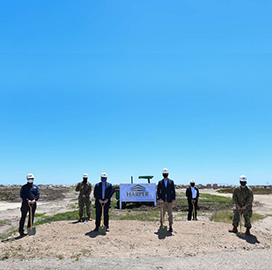 The U.S. Navy held a groundbreaking ceremony earlier this month for a testing facility at Point Mogu Sea Range in California where the service branch intends to evaluate laser weapon prototypes.

The 18,500-square-foot Directed Energy Systems Integration Laboratory will be built to simulate the behavior of high-energy weapons aboard ships in different maritime conditions, the Naval Sea Systems Command said Wednesday.

DESIL will feature a high-velocity training area, offices, a conference room and space for the Department of Defense to collaborate with industry or academic partners.

In-service engineering agents of the Navy have been tasked with operating DESIL, which will also be used for integration and evaluation of DE and HEL weapon platforms.

The branch expects customers and users to use the facility to test the effects of air density, temperature changes and other factors on HEL beam performance. They can also examine how naval ship systems can support  energy-intense weapons as well as conduct target shooting demonstrations on the site.

The lab is scheduled to open within a year.