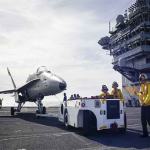 A U.S. Navy aircraft carrier has arrived in San Diego after a six-day sea trial test to mark the official completion of a 20-month extended planned incremental availability.

The Navy said Tuesday USS Nimitz went through sea trials to assess its ship readiness through an evaluation of crew performance and ship equipment operability using system checks and drills.

Ensign Lester Quinlin, air boatswain for the V-2 maintenance program, said the certification of the ship’s catapults will play a role in the launch of aircraft from the carrier.

Carrier Strike Group 11 and Carrier Air Wing 11 will join USS Nimitz to conduct flight operations and work on a flight deck certification upon the aircraft carrier’s return to sea.