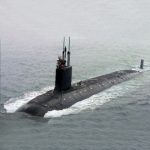 The U.S. Navy‘s supply department for the USS Illinois worked with the Naval Supply Systems Command’s Fleet Logistics Center Norfolk to deliver the Virginia-class submarine with 99.51-percent onboard material.

A team of logistic specialists monitored the delivery of more than 10,000 items in the authorized medical allowance list, authorized dental allowance list, general use consumables list and government furnished equipment for USS Illinois as well as outfitted and stowed the submarine, the Navy said Friday.

“Beyond the hull of Illinois, the most valuable asset — the crew — was provided with dedicated support facilities to ensure training, administration and day-to-day operations of the command continued unencumbered by the construction,” said Lt. Joseph Aiello, assistant director of NAVSUP FLC Norfolk’s Groton division.

USS Illinois is the Navy’s 13th Virginia-class submarine and is scheduled for commissioning on Oct. 29.