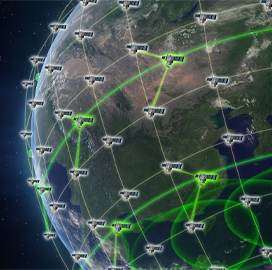 Payload covered by the Blackjack effort may include a software-defined radio as well as sensor technologies from Collins Aerospace and Raytheon Technologies. Other payloads in consideration include L3Harris Technologies’ electro-optical/infrared technology and RF systems developed by Northrop Grumman, Trident and Systems and Technology Research.

The Blackjack team is additionally assessing vehicles from Airbus, Telesat and Blue Canyon Technologies as part of preliminary design review activities ahead of a down selection process later this year.

Paul Thomas, program manager for Blackjack, said he expects to begin integration of the initial two military payloads next summer before a rideshare mission launch in 2021 and a sub-constellation demonstration in 2022.