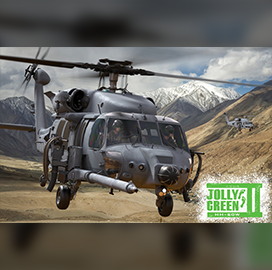 Jolly Green II, made by Sikorsky, went through heavy rains, strong winds and temperatures between negative 60 and 120 degrees Fahrenheit.

“Checking system performance under the stress of heat, cold, heavy wind and rain will give us real-world data regarding the helicopter’s capability to perform the rescue mission worldwide in various environments, which is exactly what the operator needs to make solid employment decisions,” said Lt. Col. Ryan Coates, a USAF pilot with the 88th Test and Evaluation Squadron.

Challenges included the development of a ventilation system designed to remove exhaust and allow laboratory personnel to better control temperatures.

“Everyone worked together extremely well and we completed on time and on budget,” said Ben Walker, the effort’s lead test engineer.

USAF named the helicopter after the model’s Vietnam-era predecessor.