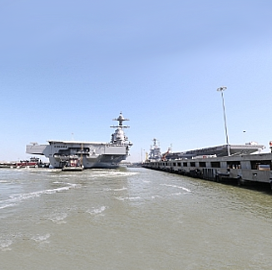 A transporter moved Ford’s 140-ton inclining weights into various positions, allowing the team to gauge and record movement distance and inclination through precision inclinometers. The rare experiment concluded with a sallying test.

Navy Cmdr. Homer Hensy, chief engineer of Ford, said the branch will use data from both the incline and sally  tests to determine the vessel’s damage control stability levels.

“This data will allow the Commanding Officer and the crew to stabilize the ship in the event of battle damage and allow Ford to maintain a stable deck to continue strike operations against our adversaries,” Hensy added.