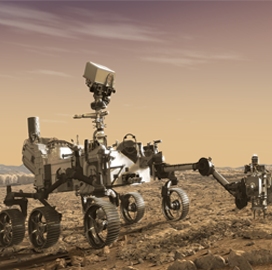 Lori Glaze, director of the planetary science division at NASA, said the agency is trying to avoid delays in a Mars rover exploration mission slated to launch in July or August, SpaceNews reported Wednesday.

Glaze told attendees at a virtual group meeting that NASA is working to balance health and safety requirements with the need to keep activities on schedule. NASA intends to launch the rover dubbed “Perseverance” between July 17 and Aug. 15 to avoid waiting for the next launch window in over two years.

NASA’s Kennedy Space Center in Florida received the rover earlier this year ahead of its launch from Cape Canaveral Air Force Station in February 2021.

According to Glaze, Mars 2020 is a top priority for NASA’s Science Mission Directorate along with the James Webb Space Telescope program which is currently facing delays.

Jim Bridenstine, administrator of NASA and former Wash100 Award recipient, previously cited Mars 2020 and the Crew Dragon mission to the International Space Station as key programs for the agency in the coming months.