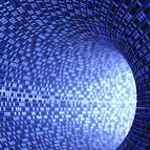 The Department of Energy’s Argonne National Laboratory partnered with the University of Chicago and Qubitekk to test a “quantum loop” that might pave the way for the development a quantum internet, National Defense reported Tuesday.

David Awschalom, a senior scientist at Argonne, said they shot out a single photon source of entangled particles into a fiber network in the Chicago suburbs and analyzed the measurements during the experiment.

“We want to make sure that those two photons are still entangled,” Awschalom said. “We measure how carefully they are [entangled] and we’re going to extend this from platform-to-platform as the basis for a national network.”