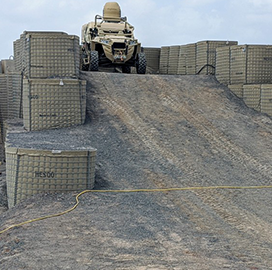 AFRL will evaluate the company’s HELWS and Phaser platforms along with the laboratory-built Tactical High Power Operational Responder in an overseas field assessment that will last for 12 months, the U.S. Air Force said Monday.

“Drones are becoming more and more pervasive and can be used as weapons intended to cause harm to our military bases at long standoff ranges,” said Kelly Hammett, director of directed energy at AFRL.

Hammett added the lab equipped THOR with an electronic technology that works to deter adversarial drones through a rapid-fire mechanism.

The SDPE Office previously tested laser and microwave systems at the White Sands Missile Range in New Mexico and at Fort Sill in Oklahoma.