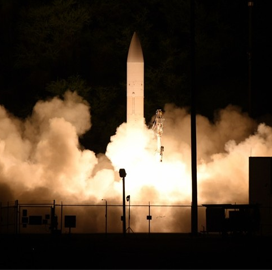 The U.S. Army and Navy launched a common hypersonic glide body to a desired point of impact during flight test held Thursday at the Pacific Missile Range Facility in Hawaii.

Both military services collaborate with the private sector in the C-HGB development initiative wherein the Navy serves as the system’s lead designer and the Army acts the production lead, the Department of Defense said Friday.

Each branch plan to adopt the glide body while aiming to build individual customized weapon and launch systems for sea or ground applications.

”This test builds on the success we had with Flight Experiment 1 in October 2017, in which our C-HGB achieved sustained hypersonic glide  at our target distances,” said Vice Adm. Johnny Wolfe, director of the Navy’s strategic systems programs.

”In this test we put additional stresses on the system and it was able to handle them all, due to the phenomenal expertise of our top notch team of individuals from across government, industry and academia,” Wolfe added.

DoD noted it aims to field a hypersonic technology for military use in the early to mid-2020s.

Once deployed, the C-HGB will house a guidance system, a conventional warhead, cabling and thermal protection shield.