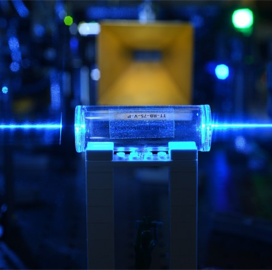 U.S. Army scientists have analyzed a quantum sensor with highly sensitive atoms and found that it has potential to detect signals across the full radio frequency spectrum.

The performance of the atom-based technology is comparable to that of electric field sensors that include passive electronic devices and electro-optic crystals, the Army said Thursday.

The study was backed by the Defense Advanced Research Projects Agency and published in Journal of Physics B. The Army's scientific team originally developed the Rydberg quantum receiver in 2018 for communications signal detection.

“Quantum mechanics allows us to know the sensor calibration and ultimate performance to a very high degree, and it’s identical for every sensor,” said David Meyer, a scientist at the Army Combat Capabilities Development Command’s research laboratory. “This result is an important step in determining how this system could be used in the field."

According to the Army, the project was in line with the branch's goals to modernize computer networks and position, navigation and timing systems, and may drive the development of novel communications methods or geolocation detection approaches.