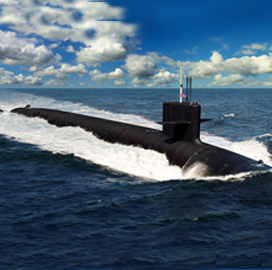 Vice Adm. Johnny Wolfe, director of strategic systems programs for the Navy, said the service considers the procurement of Columbia-class submarines a top acquisition priority and plans to have the lead boat ready by 2031.

“Every Ohio that we have to pull up, we will get a Columbia just in time,” Wolfe said. “We pushed that modernization program as far as we can push it.”

“That acquisition is going very well right now … but we have a long way to go and we have to stay consistent,” Lt. Gen. Richard Clark, deputy chief of staff for strategic deterrence and nuclear integration at the Air Force, said of GBSD. “We have to continue to be committed to this. And given the current budgetary situation that we’re in, there’s always going to be risks to it.”

Another leg of the triad is the long-range bomber. The Air Force plans to procure more than 100 units of the Northrop Grumman-made B-21 Raider aircraft. The service plans to conduct the initial flight test of B-21 by the end of 2021 and bring the aircraft online by mid-2020s.