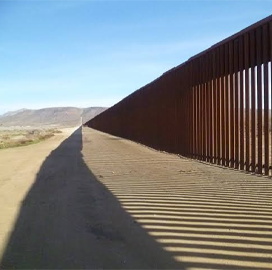 The Department of Homeland Security has decided to waive some federal contracting laws to speed up the construction of a wall at the U.S.-Mexico border.

A notice released Tuesday says a section in the Illegal Immigration Reform and Immigrant Responsibility Act of 1996 provides DHS the waiver authority to expedite the construction of additional barriers and roads at the U.S. border to prevent illegal entries into the U.S. and address drug-related events between border crossings.

Acting DHS Secretary Chad Wolf identified several areas of high illegal entry and those are the San Diego and El Centro sectors in California; the Yuma and Tuczon sectors in Arizona; the Del Rio sector in Texas; and the El Paso sector covering west Texas and New Mexico.

The DHS document is set to be published Thursday on Federal Register. FCW reported the move seeks to expedite construction projects in those areas through a waiver of the use of pricing data, wage determination, open competition and other parts of the Federal Acquisition Regulation.

"Today we are going to start waiving those for procurement regulations and laws as well," Wolf said Tuesday on Fox and Friends. "It allows to us speed up a lot of our contracts that the Army Corps [of Engineers has. Anywhere from 30 to 45 to 60 days."