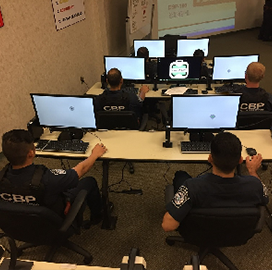 New U.S. Customs and Border Protection officers use an eye-tracking technology jointly developed by CBP, the Department of Homeland Security's science and technology directorate and the Federal Law Enforcement Training Center to increase their ability to validate the identities of people entering the country.

CBP’s Office of Field Operations Academy has implemented 24 Eye-dentity systems since 2016. The agency found that the performance of officers in detecting impostors improved by 9 percent when they used the platform in three training sessions that each lasted for three minutes.

According to the department, CBP fielded 12 updated systems last year to conduct simultaneous training of entire classes and increase the amount of time students spend using the technology.