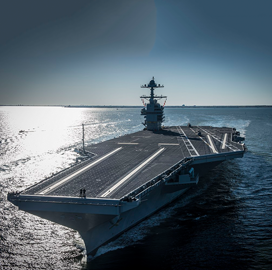 These systems facilitate the launch and recovery of aircraft operating on USS Gerald R. Ford, also known as CVN 78. The testing also assesses the carrier's air wake and interoperability with all kinds of naval aircraft.

“What we’re doing is validating years of test catapult shots that were done at the EMALS test facility at Lakehurst, New Jersey, and years of arrestments on AAG at Lakehurst, then taking that data, bringing it to sea and using it on installed equipment aboard our ship, now in an austere underway environment with different wind and environmental conditions to build those safe flight envelopes,” said Capt. John Cummings, the ship's commanding officer.

Tests will continue with the addition of new technologies for both EMALS and AAG. The tests also build on adjustments made by Huntington Ingalls Industries during the carrier's post-shakedown availability.