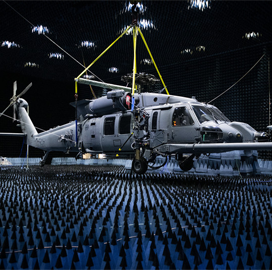 The U.S. Air Force's 413th Flight Test Squadron has hoisted a Sikorsky-built combat rescue aircraft within an anechoic chamber at a Joint Preflight Integration of Munitions and Electronic Systems facility in Florida in preparation for an upcoming defense systems test.

The facility is built to isolate electromagnetic radiation and secure high-quality data on the HH-60W helicopter's defensive platforms, the Air Force said Wednesday.

The tests are intended to validate the helicopter's combat capabilities and observe the systems' performance prior to electronic warfare testing. J-PRIMES will use the recorded data to capture any potential aircraft issues and support specification compliance.

The HH-60W aircraft will work to perform personnel recovery and search-and-rescue operations in support of military services. Sikorsky has started low-initial rate production efforts for the aircraft following a Milestone C decision by USAF in September 2019.