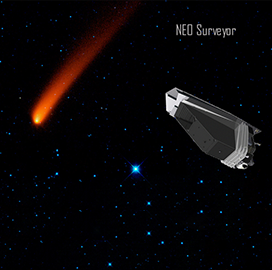 A team of astronomers from the University of Arizona plans the next phase of the projected NASA mission that aims to develop a space-based infrared telescope designed to detect potentially hazardous near-Earth asteroids.

Professor Amy Mainzer of UA's Lunar and Planetary Laboratory and her team will provide documentation and reviews to help the space agency decide whether to begin the preliminary design phase of the Near-Earth Object Surveillance Mission in 2020, the university said Tuesday.

The telescope, which is scheduled for launch by as early as 2025, would fly with a camera capable of detecting infrared glow from near-Earth objects, allowing astronomers to detect their movement and location in space by sensing their heat emission.

The NEOSM project, which is part of NASA’s Planetary Defense Program, aims to meet a congressional requirement to detect 90 percent of hazardous asteroids of at least 140 meters in diameter by the end of next year.

NASA's Jet Propulsion Laboratory in Pasadena, Calif., will work closely with partners from industry and academia to develop and manage the infrared telescope.