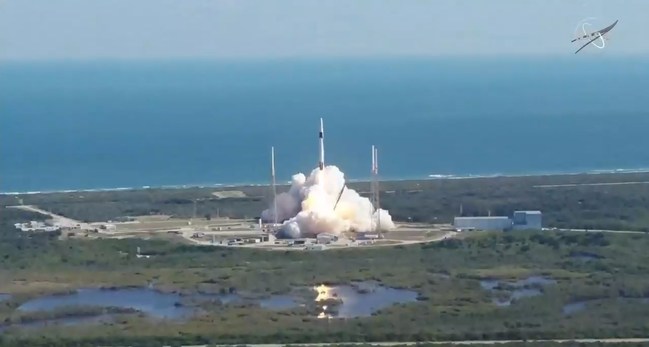 SpaceX launched a Dragon cargo spacecraft on Thursday at 12:29 p.m. EST to deliver more than 5,700 pounds of NASA cargo and science investigations for the International Space Station.

The delivery, SpaceX's 19th cargo flight, will support dozens of new and existing investigations, including a better picture of Earth’s Surface using the Hyperspectral Imager Suite (HISUI), malting barley in microgravity to find ways to adapt it for nutritional use on long-duration spaceflights, launching Robotic Tool Stowage (RiTS) to check the station for leaks and more.

The spacecraft launched on a Falcon 9 rocket from Space Launch Complex 40 at Cape Canaveral Air Force Station in Florida. It’s scheduled to arrive at the orbital outpost on Sunday, Dec. 8. Dragon will join three other spacecraft currently at the station. Expedition 61 Commander Luca Parmitano of ESA (European Space Agency) will grapple Dragon with NASA astronaut Andrew Morgan acting as a backup.

NASA's Jessica Meir will assist the duo by monitoring telemetry during Dragon's approach. Coverage of robotic installation to the Earth-facing port of the Harmony module will begin at 8 a.m.

Coverage of the spacecraft's approach and arrival at the space station will begin at 4:30 a.m. on NASA Television and the agency's website.