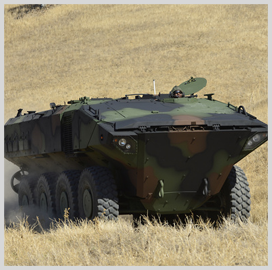 The U.S. Marine Corps has conducted testing activities for the Amphibious Combat Vehicle at Camp Pendleton in Southern California.

The Marine Corps said Friday its Amphibious Vehicle Test Branch evaluated the ACV’s performance and maneuverability during the three-day exercise, including the amphibious vehicle's capacity to operate in low light along the surf and in the ocean.

In June 2018, the Marine Corps selected a team comprised of BAE Systems and Iveco Defence Vehicles to build 204 ACVs to replace the Amphibious Assault Vehicle as part of a $1.2 billion contract.

USMC plans to deploy ACVs that come in recovery, command-and-control, up-armed and armored personnel carrier variants. The vessel will contain weapon systems for fire support and be used to traverse high surf as well as sloped terrain.