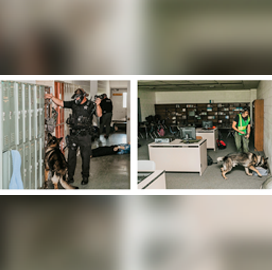 The Department of Homeland Security's Science and Technology Directorate is exploring ways to deploy security dogs in unconventional scenarios.

DHS S&T said Thursday it partnered with other entities to study the use of K9 teams for new applications such as path clearance and explosive detection during active shooter scenarios.

The directorate worked with the Counterterrorism Advanced Training Center and Battelle Memorial Institute in September to demonstrate this concept.

S&T then used the gathered data to assess the teams' performance and identify ways to integrate bomb detection personnel with first responders for such a scenario.

“Based on our first two active shooter response pilot demonstrations, it’s fair to say that explosive detection canine teams can potentially be a great asset to first responders during an active shooting scenario,” said Don Roberts, who manages the S&T Detection Canine Program.

“However, we will need to conduct more studies and collect more data on the canine teams specifically, before we can draw any statistically significant conclusions," he added.