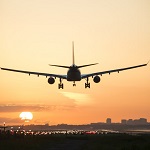 The Atlantic Council has released a report detailing potential challenges the aviation sector may face in mitigating next-generation cyber attacks.

The report, titled "Aviation Cybersecurity: Scoping the Challenge", builds on the organization’s findings from its 2017 report on aviation cybersecurity and highlights the implications of 5G connectivity, autonomous systems and electric vertical takeoff and landing technologies to flight operations.

As part of the study, the council surveyed and interviewed over 244 respondents on their views on aviation cybersecurity. The first part of the report covers issues involving enterprise information technology and the role of cyberspace in flight safety, while the second part tackles cybersecurity challenges faced by suppliers and customers in the aviation industry.

“Managing aviation cybersecurity requires making thoughtful choices from a clear and well-informed understanding of risk,” the report stated. "Here, despite ample challenges, there are some glimmers of hope. But, on topics such as information sharing, it was clear that respondents thought there was much more to be done.”