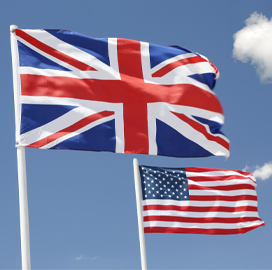 The U.S. and U.K. have agreed to allow access to each other’s digitally stored data and evidence for law enforcement purposes as part of the Clarifying Lawful Overseas Use of Data Act, FCW reported Friday.

The tentative agreement covers a wide range of crimes and will comply with data protection laws, according to the Department of Justice. The agreement also prohibits both countries from using authorities to target each other's citizens, and requires the U.S. to seek permission from the U.K. when using data for cases involving the death penalty.

"Only by addressing the problem of timely access to electronic evidence of crime committed in one country that is stored in another, can we hope to keep pace with 21st-century threats," said U.S. Attorney General Bill Barr in a statement.

U.S. and U.K lawmakers are slated to conclude a review process on the CLOUD Act’s first bilateral agreement ahead of its full implementation in six months.