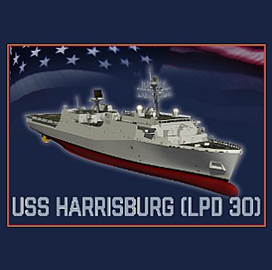 The 684-foot vessel will travel at a speed of 22 knots and measure at 105 feet in beam length. Huntington Ingalls Industries is slated to build USS Harrisburg at its Mississippi facility.

“The people of central Pennsylvania have always played a critical role in forging the strength of our Navy and fighting to defend our nation,” said Spencer.

“The future USS Harrisburg will carry on this legacy to every part of the world.”