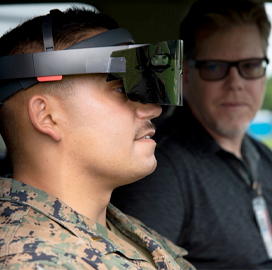 Spectrum Hunter is an augmented reality-based hands-free device that will help users view RF waves via heavy sunglasses attached to a headset. NIWC is developing design updates in line with the results of the demonstration.

“While they were impressed with the software capabilities such as the augmented user interface, adaptability and potential for interoperability with other systems, they also pointed out the desire for increased durability and agility of the prototype,” said Jason Bartlett, a scientist at NIWC Atlantic.