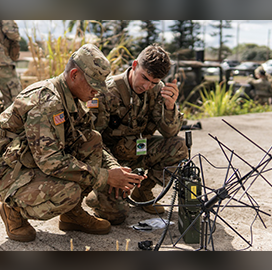 Results of the multiservice operational test and evaluation say the system is operationally effective, cybersecure, suitable for operations and ready for transition, the service branch said Wednesday.

The Navy's Commander, Operational Test and Evaluation Force conducted the test over multiple months to assess MUOS' performance in a simulated operational environment.

The testing involved contributors from the U.S. Marine Corps and the U.S. Army.

MUOS consists of five satellites that each hold two payloads: a legacy payload and one with the newer Wideband Code Division Multiple Access technology.

The legacy payload would allow MUOS to maintain narrowband communications as the Navy transitions the satcom system to WCDMA, an integrated waveform tailored for commercial cellular connectivity.

WCDMA would boost beyond line of sight communications by 10 times in capacity, compared to legacy technology.

“This is the last critical milestone before turning MUOS over for full operations and I am very proud of the entire team that contributed to this outstanding achievement,” said Capt. Chris DeSena, program manager of the Navy Communications Satellite Program Office.