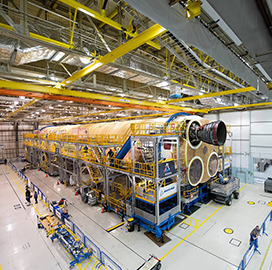 NASA's Michoud Assembly Facility has connected the first RS-25 engine to the core stage of a rocket that will support lunar missions with the Orion spacecraft.

Engineers docked one of four RS-25 engines to the Space Launch System's core stage as part of a collaborative effort with Boeing and Aerojet Rocketdyne, the space agency said Wednesday.

The team will go on to integrate the engine's propulsion and electrical systems, and then repeat the same process for the remaining RS-25 units.

Liquid hydrogen and liquid oxygen fuel the engines that will fire continuously for 8.5 minutes during the first mission of the Artemis program, an effort that aims to revive manned space exploration, starting with the Moon.

NASA plans to launch Artemis I in 2020 in preparation for the crewed 2024 mission. The SLS is designed to bring astronauts and supplies to the Lunar surface with just one launch.