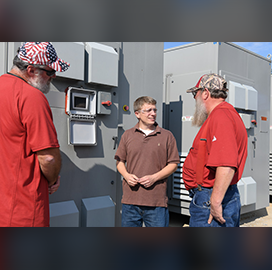 A team at Arnold Air Force Base augmented software of electrical equipment to detect dangerous conditions, avoid unnecessary downtime and prevent damages during a recent test.

The Aerodynamics and Propulsion Test Unit, a wind tunnel designed to facilitate hypersonic and supersonic tests, had problems with a certain electrical component, USAF said Sunday. The software modifications addressed an uncommanded runaway of a rectifier, an electrical machine that transforms alternating current into direct current.

“A runaway is when the output current increases significantly above the set point value,” said Adam Webb, an electrical engineer who worked on the test.

"A repeat test at APTU can be expensive and could cause additional degradation to the test article," Webb noted.

Gareth Penfold, an engineer in charge of instrumentation data and controls, used a spreadsheet-based method to track equipment that require calibration.

Webb and Penfold have been named recipients of Significant Contributor Awards in recognition of this achievement.