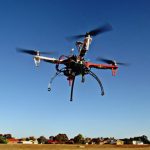 The Department of Homeland Security issued an alert saying Chinese-built drones may be transmitting to manufacturers sensitive flight information that could be accessed by the Chinese government, CNN reported Monday.

The drones “contain components that can compromise your data and share your information on a server accessed beyond the company itself,” DHS’ Cybersecurity and Infrastructure Security Agency said in the alert obtained by CNN.

“The United States government has strong concerns about any technology product that takes American data into the territory of an authoritarian state that permits its intelligence services to have unfettered access to that data or otherwise abuses that access,” CISA noted.