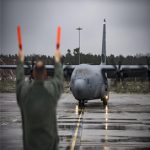 The service currently has two WC-135 Constant Phoenix aircraft in its nuke-sniffing arsenal, which Air Force Chief of Staff David Goldfein believes is too few to address the demands of the Defense Department.

Goldfein added the existing Constant Phoenixes are “too old” to monitor the nuclear activities of U.S. adversaries such as Russia, North Korea, China and Iran.

The Air Force can utilize the C-130s, which can be equipped with Harvester Particulate Airborne Collection Systems kits, when the Constant Phoenixes are not available for nuke-sniffing missions.

L3 Technologies will replace the two Constant Phoenixes with three KC-135R aircraft to increase the number of nuke sniffers by one aircraft.

The Air Force proposed $208 million of funding in 2019 and $8 million in 2020 for the Constant Phoenix modernization effort.