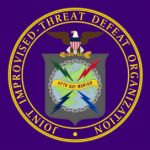 The Defense Department said Friday the U.S. Army chief of staff announced the assignment of Bentley, who will work under the Defense Threat Reduction Agency in Fort Belvoir, Va., and move from Afghanistan.

JIDO became part of DTRA in 2016 and was renamed from the Joint Improvised-Threat Defeat Agency pursuant to that year’s National Defense Authorization Act.

Bentley has also served as deputy director of operations at the National Joint Operations Intelligence Center as part of Operations Team – 1 (J-3) of the Joint Staff in Washington.