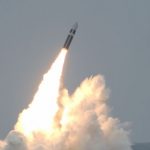 NNSA announced plans to create the W76-2 warhead based on the W76-1 payload of the U.S. Navy‘s Trident missile and issued the Nuclear Posture Review in February that resulted in the non-inclusion of the program in the fiscal 2019 budget request, the publication said.

Total funds for the nuclear weapon program for fiscal year 2019 will amount to $87 million, with $22.6 million from the Defense Department and a part of the Future Years Defense Program budget, the publication detailed.

The FYDP budget is worth $48.5 million spread across the program lifetime, which will run through fiscal year 2023, Defense News noted.