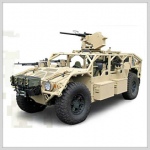 GMV 1.1 can be airdropped with parachute systems and transportable through CH-47 Chinook, C-130 Hercules and C-17 Globemaster III platforms.

Aircraft from the U.S. Air Force, U.S. Navy or U.S. Marine Corps will provide aerial support for the vehicle.