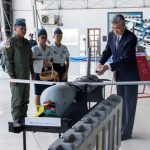 The Boeing–Insitu-made UAS was designed as a low-altitude aircraft with intelligence, surveillance and reconnaissance functionalities.

The armed forces of the Philippines intends to leverage ScanEagle’s ISR capacities for the 300 air intelligence and security wing, operating from Antonio Bautista Air Base, Palawan.

Ambassador Sung Kim assisted in the delivery of the UAS.