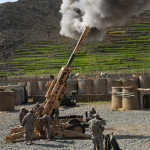 The U.S. Army plans to demonstrate precision-strike missiles, ramjet projectiles, hypersonics and other technologies under the Long-Range Precision Fires program within the next two years, Defense News reported Tuesday.

Brig. Gen. Stephen Maranian, LRPF cross-functional team lead, told the publication in a Monday interview that the service needs to upgrade its surface-to-surface fire capabilities to ensure a “clear overmatch” against potential threats.

He noted that the LRPF CFT intends to convert the Army’s self-propelled M109A7 howitzer into extended-range cannon artillery, begin development work on an autoloader to boost the cannon’s volume of fire and further develop the LRPF capability to home in on targets at “strategic ranges.”

The service also plans to demonstrate missile prototypes from Lockheed Martin and Raytheon in 2019, Maranian said.

The Army awarded Lockheed a $73.8 million contract and Raytheon a $116.4 million contract to build prototype missiles under the LRPF program’s technological maturation and risk reduction phase.