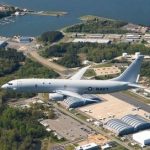 Australia has received six of 12 P-8As on order to date, RAAF said Tuesday.

The Number 11 Squadron operates the delivered units at a military airbase in Edinburgh, South Australia.

Marise Payne, Australian minister for defense, said the P-8A will succeed the country’s fleet of Lockheed Martin-built AP-3C Orion aircraft that has been in service for nearly four decades.