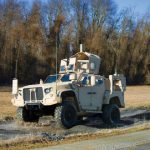 The U.S. Army and Marine Corps have kicked efforts to test and evaluate the Oshkosh Defense-made Joint Light Tactical Vehicle platform as part of a joint military program.

More than 200 government civilian, military and contractor personnel will gather data during the JLTV Multi-Service Operational Test and Evaluation at the Marine Corps Air Ground Combat Center in California, the Army said Thursday.

“Data collected will be used to address operational effectiveness, suitability and survivability of the JLTV in its intended environment,” said Randall Fincher, a test officer of the Army Operational Test Command.

Oshkosh Defense won a $6.7 billion contract in 2015 to replace the Humvee platform of the two service branches.

The Army intends to procure 49,000 JLTVs while the USMC plans to buy 9,000 units through the contract.