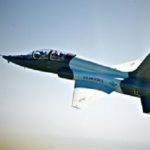 The U.S. Air Force and NATO have partnered to deal with pilot shortage, a problem that other NATO members have also been experiencing.

The Joint Jet Pilot Training program’s Steering Committee conducted a study on the matter, and found that the shortage of usable pilots stems from the lack of instructors and available simulators, among other reasons, the Air Force said Wednesday.

The study focused on the capacities and limitations of courses with the T-6A Texan II and T-38C Talon trainers, as well as fundamental courses under the program that aim to address the pilot training needs of NATO partners.

The committee observed that limits in instructors and simulators prevent the program from increasing the number of participants able to undergo training, which leads to a shortage in mission-ready pilots.

Col. Andrea Themely, commander of the 80th Flying Training Wing, stated that the maintenance cost for the T-38C continues to go up, and that the arrival date of the new T-X trainer to Sheppard Air Force Base has not yet been decided.

She added that Sheppard AFB should be given priority for the new trainers, as the base holds the largest T-38 fleet within the Air Education and Training Command, and is home to the service’s sole fighter-centric flight training program.

“Almost 50 percent of the total U.S. Air Force students that fly fighters come from Sheppard Air Force Base,” she said.

“This is the only fighter training pipeline for our partners from Germany, Norway, the Netherlands and Denmark,” she added.

The T-X is being developed to replace the T-38 for flight training exercises.